Raasay is back in the water after her last (for a while) winter ashore. At least as presently planned.

Still some pre-season stuff to do - mainly an engine service.

I'm going to do a dinghy survey of the estuary bar this weekend, to check whether the channel has moved. Then we might go sailing ... 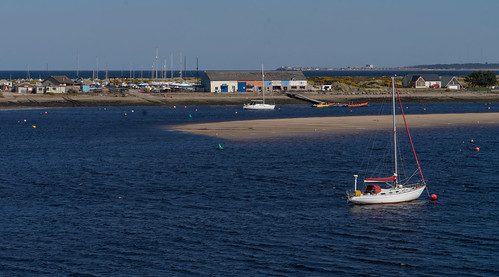 I had 'Raasay' alongside the quay in Findhorn for a couple of days of 'harbour-caravanning', and took it back across to the mooring just before high tide today.

An hour before high tide, there is still a strong tidal current in 'D' section, and the wind from the SW was not quite against it, but crossing it steeply. I could see 'Astrea' on the next mooring along being pushed up tide by the wind, but still lying to the tide. Picking up the mooring on my own was going to take a couple of attempts.

I worked out a mode of approach after some trial and error, and was creeping across the tide, pointing down wind, and letting the boat drift towards the mooring. It's always tricky to time the jump from the helm to the boat hook and I left it about a second too long. By the time I got to the pickup bouy it was being dragged under the boat. 'First attempt...' I thought, and waited for it to come out the other side.

It didn't. It snagged on something under the boat and hung on tight.

The engine was running but I daren't engage the prop, so I just let things take their course to see how the boat would lie before I tried to figure out what had happened. I tried the tiller and found it almost impossible to move, so reckoned the bouy must be jammed in the rudder somehow. I confirmed this by taking a couple of pictures over the side (it's handy to have a waterproof camera ...), in which I could see the buoy stuck near the tip of the rudder - the rope was between the rudder and the base of the skeg (which holds the bottom rudder bearing).

I waited a little to see if it would just come unstuck, and wondered what to do. I didn't want to cut the rope, but it was beginning to seem unavoidable. I taped a knife to the boathook, and got to work.

It was very awkward - every time the knife slipped off the rope I had to start again, because the rope was so far under the water I couldn't see where I was cutting. I could feel the serrated blade making some kind of progress, though.

After five or ten minutes, the bouy suddenly popped out of where it had lodged itself and floated free - still attached to the pick up rope, which was now severely damaged by my attempts to cut through it.

Later, I thought more carefully about how the lower rudder bearing on the Rival worked, and realised that the only way the rope could get stuck was straight up between the bearing support and the bottom of the rudder. A gentle push down - as supplied by someone trying to cut the rope, for instance - was all it would have taken to free it.

I brought the boat round again, and almost by luck found myself approaching the pickup buoy at a hopeful angle. I motored gently towards it, grabbed the boat hook, and pulled in on board. I had just assessed the damage - two strands cut through and a serious start on the third - when I realised that I'd left the prop engaged, and the buoy was being dragged out of my hands.

I managed to lodge it around a shroud, dive into the cockpit to disengage the prop, and get back to it before the remaining strand snapped or it worked itself free.

The remainder of the process was, as usual, still a bit fraught. It's hard to get the mooring strop on board through Raasay's rather tight bow roller arrangement, so I have winch it. It was nice to get on with the normal difficulties, though, and get the boat secured.

I won't be so casual about letting the mooring go under the boat in future. And, if it does, and the pickup buoy gets stuck in the rudder, I won't go straight for the most desperate option ...

Now the tide has turned, the boat is lying quietly to the dropping wind and the ebb. Maybe time for a cup of tea.
Posted by ajax_pc at 06:30 No comments:

I'll give a list of dates presently, but from Terschelling we spent a night at anchor in the Waddenzee (see 'A Night at Sea', from Riddle of the Sands). Then to Den Oever and through the locks.

The Dutch are very generous with their locks and canals - with the exception of a small (total about 20 euros) charge for going through Haarlem everything was free. The marinas were also cheap, and there were places where I could tie up for nothing (often in town centres).

Two days in central Amsterdam in the Marina het Realeniland (in the Westerdok) only cost 50 euros with power. It was quaint rather than fully serviced, but very pleasant. They don't have many places - I think I got the only one, and had to raft up on the first night. If you want to follow me in, phone ahead!

The route into the Westerdok is a little bit hair-raising - small bridges and Amsterdam canals - but very atmospheric. 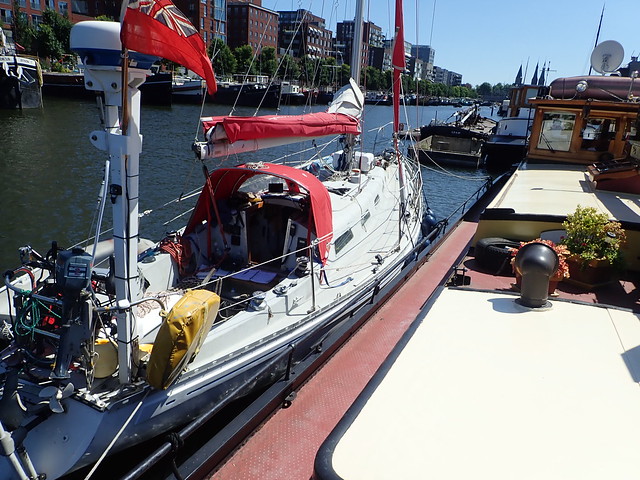 After trying & failing to get hold of the marina manager in Peterhead, I decided to go with what I thought was about fifty hours of fuel on board (I can carry about four days). We left the marina at 09:35.

On the first day (Thursday) we used the engine for 4 hours. At 23:40 we were getting too little wind to sail, and switched it on again. It was switched off again at 18:15 on the 7th. Total so far, about 46 hours. We had 10 hours left in the main tank, which I thought we should keep for final approach and manoeuvring.

I had drained the reserve from full, getting 39 hours - a useful statistic. I then switched tanks, bled the diesel, and switched it off again.

We were utterly becalmed until 03:00 on the 8th (Saturday morning), so we lost 9 hours because of the fuel shortage. We then sailed towards the channel between Terschelling and Vlieland. The winds were very light, and we were slow - the spinnaker was up for about 8 hours from 09:30g.

At 17:30 we put the engine back on to motor for the last six hours, tying up in Vlieland just before midnight.

In the interim, Carrie had become concerned about our late arrival, and had asked the coastguard if they had heard from us. This resulted in a Pan Pan and a Navtex report, so we were much better known than we expected to be by the time we arrived. I hadn't seen the Navtex report because I had only looked at weather forecasts ...

I should have been much clearer about the range of possibilities.

And I should have been more careful about fuel ...

We stayed two nights in Vlieland, recovering and sightseeing, and filling the tanks, before moving on to Terschelling for a night.
Posted by ajax_pc at 09:24 No comments:

I'm in the Royal Norfolk and Suffolk Yacht Club marina, in Lowestoft. I'm going to pick up the north going tide this evening and sail round to Cromer - where I will anchor off.

Conditions are in my favour, and there aren't so many places I can stop until I get north of the Humber estuary.

I'll be following the tides.

I sailed fifty miles out of Stellendam yesterday, starting about 4:30 - just before first light. I thought I was going to go to Walton, or maybe Harwich, because that was the best course I could make. Then the wind began to die & I decided that if I was going to motor I might as well head for Lowestoft, which was further on my way and also five or ten miles closer.

I'll post some links to photos and stories presently ... I've realised that doing this in some sort of orderly way is a fond hope.
Posted by ajax_pc at 09:24 No comments:

Catching up - Portsoy and Peterhead

I've got some catching up to do.

On the 29th of June, Edan and I took Raasay through to Portsoy for the boatshow. 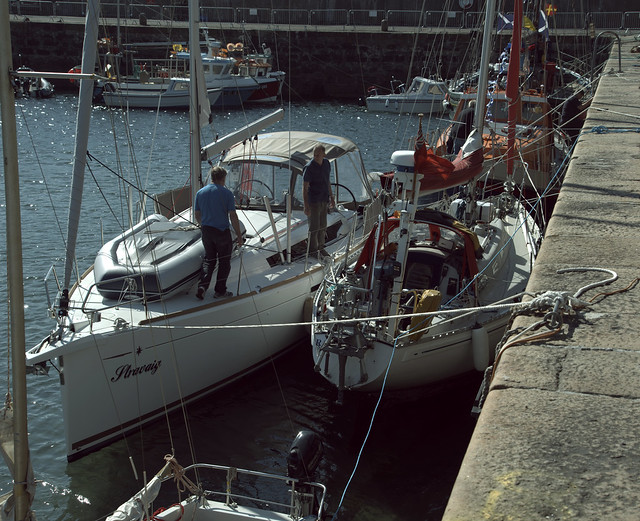 We had an uncomfortable night on the first night because she settled very head down - the slope of the bottom was against us. On Saturday we swapped round.

The weather was blistering.

Portsoy was just the first step in a much larger master plan, though, and on the Monday (2nd July) I sailed round to Peterhead. 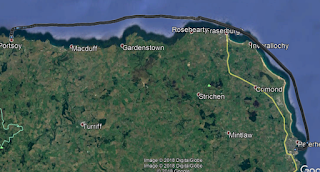 I did some final checks and tasks, and some business in Aberdeen, and then Angus joined me on Wednesday night to sail for Vlieland on Thursday morning.

I was planning to fill up with diesel in Peterhead, but the marina manager was very difficult to get hold of and I decided to make do with what I had. Surely we wouldn't be motoring for more than 50 hours ...

This has been needing done for a while ... 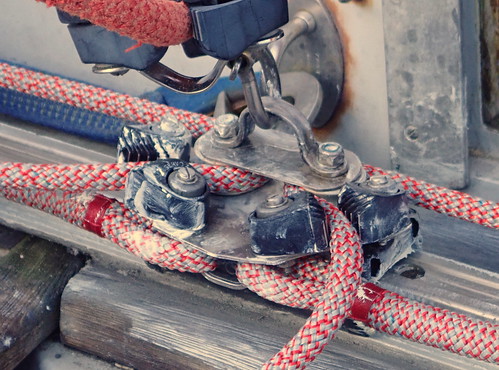 Still some cleaning up to do.
Posted by ajax_pc at 13:12 No comments: